Preeclampsia, one of the most common and dangerous gestational complications, involves elevated blood pressure and kidney dysfunction. Few treatment or prevention strategies exist. Preeclampsia’s effects on the fetal brain are relatively unknown. Using a mouse model of preeclampsia, whereby dams are chronically exposed to arginine vasopressin (AVP) across pregnancy, we find disturbances in offspring neurodevelopment at multiple levels of analysis and timepoints. Exposed offspring express altered behavior as adults (impaired learning and memory in females, anxiety-like and prosocial behavior in males), as well as decreased cortex volume in late gestation and neonatally. RNA-sequencing also reveals sex-specific changes in the E18 cortical transcriptome.

This AVP model of preeclampsia also results in altered levels of pro- and anti-inflammatory cytokines across maternal, placental, and fetal tissues. Prenatal inflammatory processes are known to regulate multiple domains of neurodevelopment (detailed further in our 2018 review in Biological Psychiatry). Our ongoing work seeks to determine how prenatal exposure to maternal inflammatory factors, including the pro-inflammatory cytokine IL-17 and the growth factor and cytokine TGFβ, both altered in the AVP model, regulate offspring neurodevelopment. Critically, prenatal maternal IL-17 is sufficient to result in offspring phenotypes which broadly overlap with those caused by AVP including intrauterine growth restriction and cortical growth deficits, as well as altered adult social and anxiety-like behaviors. Our future work will examine how cortical development is impacted in offspring from this model of preeclampsia, as well as how particular immune factors mediate these impacts.

Because both depression during pregnancy and its current pharmacologic treatments may affect prenatal neurodevelopment, there is a critical need for safe and effective new treatments. This project explores the use of P7C3 compounds as a potential pharmacologic treatment for maternal depression. In a mouse model using chronic stress to induce a depressive-like phenotype, we examine behavioral changes occurring in response to prenatal stress and/or P7C3 compound treatment in both dam and adult offspring. We also explore underlying mechanisms that may explain these changes – namely, changes in redox balance, neuron death and morphology, and GABAergic systems in offspring. The goal of this project is to establish the viability of the use of P7C3 compounds as a safe and effective treatment for maternal depression that may, in the future, be translated to patient care. 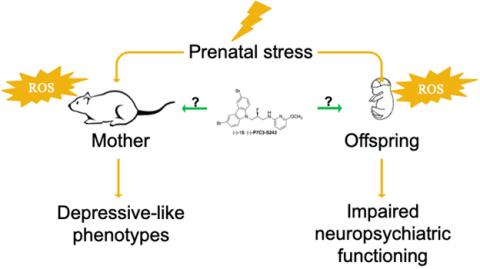 Prenatal exposure to the pyrethroid class of pesticides has been associated with low birth weight and neurodevelopmental delay in children. Through a project jointly funded by the University of Iowa’s Environmental Health Science Research Center (EHSRC) and the Center for Health Effects of Environmental Contamination (CHEEC), we have utilized a mouse model to investigate the mechanisms responsible for these effects. Our research has focused on the effects of the type II pyrethroid cypermethrin on the differentiation and migration of GABAergic progenitors in the embryonic brain, as well as how indirect placenta-mediated modes of action alter fetal growth and neurodevelopment. 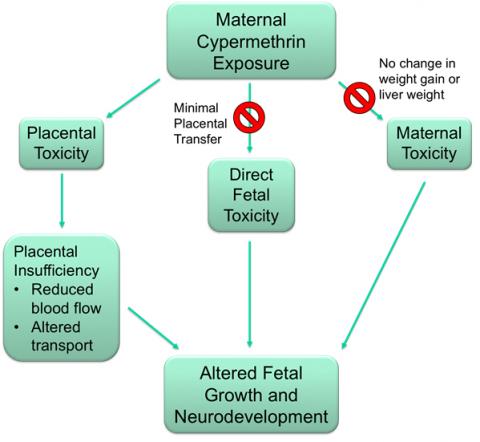 Clinical studies have indicated that some patients with autism spectrum disorder (ASD), particularly males, exhibit bilateral enlargement of the caudate and putamen, two subcortical regions that comprise the striatum. We are interested in the effects of prenatal maternal stress on neural progenitor cell (NPC) proliferation in the developing embryonic striatum. There is evidence prenatal stress promotes NPC proliferation during a critical point in striatal morphogenesis, and we are studying both the molecular mechanisms of this stress-induced proliferation as well as the resulting effects on offspring behavior in a mouse model. To test this, we pharmacologically induce cell proliferation in utero striatal NPCs with the selective mGluR5 agonist CHPG.  We also have genetic models that employ tissue-specific knockouts of IGF-1 receptors from neuroprogenitors, we well as tissue-specific knockout of IGF-1 from its developmental source, the placenta.  Adult offspring from these manipulations will also be tested to access the extent to which they exhibit behavior deficits congruent with ASD in humans.